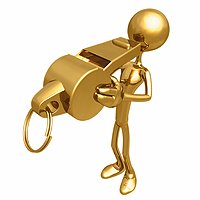 But the man who was healed did not know who it was, for Jesus had slipped away while there was a crowd in that place. Afterward Jesus *found him in the temple and said to him, “Behold, you have become well; do not sin anymore, so that nothing worse happens to you.” The man went away, and told the Jews that it was Jesus who had made him well. For this reason the Jews were persecuting Jesus, because He was doing these things on the Sabbath.
(John 5:13-16)

After the man had been healed by Jesus from a 38 year illness he is confronted by the religious people. He was carrying his mat on the Sabbath (which Jesus had told him to do vs 8) and after being questioned about the “violation” he pins the infraction on Jesus.

Why did this man rat out Jesus? Wasn’t he grateful for what Jesus had done? Perhaps the man wasn’t ratting Him out. Maybe he thought he was doing a good thing by telling the religious people what they wanted to know. After all, Jesus did tell the man not to sin any more or something worse would happen. Unfortunately, we are left to speculate why the man felt compelled to go back to the religious people and inform them that it was Jesus. But regardless of the man’s motives, the result is clear; they began persecuting Jesus.

This is one of the cold hard facts of ministry; Not everyone you help or train will be appreciative, responsive, or enduring. Actually, some people may even become your enemies. But why should we be surprised? It happened to Jesus all the time. And if that wasn’t bad enough, it was one of the 12 that betrayed Him. But Jesus never stopped helping people. He never gave up on the 12 when they let Him down or did something stupid. As Disciplemakers we must become accustomed to failure (including our own). It is part of ministering in a lost world. One of my favorite Proverbs is “Where no oxen are, the manger is clean, But much revenue comes by the strength of the ox.” (Proverbs 14:4). In farming there is Ox poo and with people there is people poo. Whether the offences are intentional or not, ministry is messy. And by the way, unlike Jesus, we are not perfect Disciplemakers. So sometimes we are the poo. But the benefits far outweigh the problems. Disciplemaking is a life of forbearance, forgiveness, understanding, and endurance. Keep Pluggin’.

Tips for Messes in Ministry: