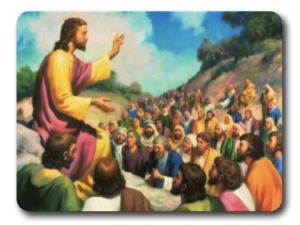 And when day came, He called His disciples to Him and chose twelve of them, whom He also named as apostles…Jesus came down with them and stood on a level place; and there was a large crowd of His disciples, and a great throng of people from all Judea and Jerusalem and the coastal region of Tyre and Sidon, (Luke 6:13,17)

Yesterday I talked about the definitions of discipleship as a process of following Jesus and becoming like Him. I also tried to illuminate from the gospel of John how evangelism is part of discipleship. Today I want to talk about the methods of discipleship (or the methods of becoming like Jesus).
For the last 80 years of modern American Christianity, much has been said and written about discipleship. Dawson Trotman, the founder of the Navigator’s, was instrumental in developing tools and techniques for discipleship. Various para-church and local church organizations have adopted and adapted many of these methods for their ministers. And although these tools and methods are very helpful they are not the centerpiece of the discipleship process. The centerpiece of discipleship is becoming like Jesus and therefore any tool or technique that helps me to do so is fair game.
Let me illustrate. Navigators have put a premium on one-on-one discipleship. Is this the only technique for discipling men and women? As we look to Jesus’ ministry the obvious answer is no. Men and women were becoming Jesus’ disciples in various sizes and group settings. In Luke 6.12-17, we see three distinct people groups; the 12 apostles, a large crowd of disciples, and a great throng of people. The group that I’m most concerned with for this discussion is the middle group, the large crowd of disciples. The question must be asked; how did this large crowd of disciples become disciples? The answer is primarily through Jesus’ teaching in a large group setting.
But he also chose the 12 because he wanted to spend significant time with them in order to train them as apostles. He formed a small group in order to be more effective. Later in John chapter 21, when Jesus is exhorting Peter, Jesus speaks to him man-to-man. Jesus wanted to make sure that Peter got the message so he speaks to him one-on-one. Jesus uses this technique for effect.
So we can observe from Jesus’ ministry that He had different levels of discipleship. I separate these levels into four distinct groups; congregation, sub congregation, small groups, and one-on-one. It should not escape our notice that the effects of becoming like Jesus increase as groups get smaller. But this does not negate the fact that Jesus was able to help people follow him and become disciples in large groups. 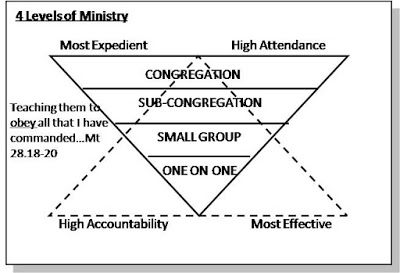