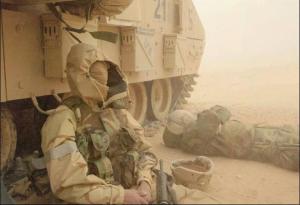 As they were going along the road, someone said to Him, “I will follow You wherever You go.” And Jesus said to him, “The foxes have holes and the birds of the air have nests, but the Son of Man has nowhere to lay His head.” (Luke 9:57–58)

I was watching the news during the invasion of Iraq and I saw some soldiers sleeping on the ground in the middle of a sandstorm. I have always marveled at the commitment of soldiers and the level of discomfort they endure as part of their profession. But you know, the disciple of Jesus is called to the same forfeiture of comfort for the sake of the mission. Jesus was constantly on the move and sleeping heaven knows where. He gives ample warning to the would-be follower, “I don’t even have a place to lay My head”. He calls His disciples out of their “comfort zones” and into the battle for the souls of men and women. He calls us to a life of blood, sweat, and tears for the sake of His kingdom. Just like the soldier, a disciple can expect discomfort to be a part of the job description.

You can receive “Following Jesus” via email by subscribing below. Enter your Email